Last week’s round up was rather delayed so we thought instead we’d do a longer fortnightly round up – some really interesting reads and listens below.

Festival contributor Claire Connolly of UCC wrote in the Irish Times about the power of literature in a time of global pandemic. We are looking forward to hearing Claire’s contribution to our digital festival, as part of a History Hedge School on Ireland, Empire and the Sea. This will be on our website from 8 August and via History Ireland.

On a related topic of pandemics (unavoidable really), The Irish Story’s most recent podcast is about how the terrible Sligo cholera epidemic in 1832 inspired Bram Stoker, the author of Dracula. Stoker’s mother Charlotte Thornley survived the epidemic and told her son stories of that time. We have previously posted a link to an article on the London Library’s website about the books Stoker consulted in that library while researching the same book.

In the Irish Times earlier in the month Marie Coleman of QUB discussed events in the north a century ago. 21 July 2020 marked 100 years since the beginning of the expulsion of an estimated 7000 workers from Belfast’s shipyards and other manufacturing industries in the city – all these workers were Catholics or socialists. The Irish Story also had an article on the violence in Belfast in July 1920.

On the theme of the revolutionary period, RTE Radio 1 broadcast a fascinating documentary on 18 July – The Little Shop of Secrets – about Nora and Sheila Wallace, whose newsagents shop in Cork City played a crucial role in the War of Independence in Cork.

The Ports Past and Present project, partly based in UCC, always has interesting material on its blog. This article by Elizabeth Edwards caught our eye, looking at the experience of women crossing between Ireland and Wales. Mary Wollstonecraft had a calm crossing from Holyhead to Dublin in 1786 and found herself lost in a sea of thoughts. The crossing was a less positive, and sometimes positively dangerous, time for others who feature in the article.

Over the summer the Dictionary of Irish Biography has been highlighting individual stories by theme – so far they have had rogues and now they are focusing on explorers. Those featured include aviator Lady Heath (pictured below), astronomer Annie Maunder, William Lamport, apparently the inspiration for Zorro and Thomas Heazle Parke, who was the first Irishman to cross Africa and once “saved a man’s life by sucking arrow poison from his wound”. How could you not want to read more here ?! 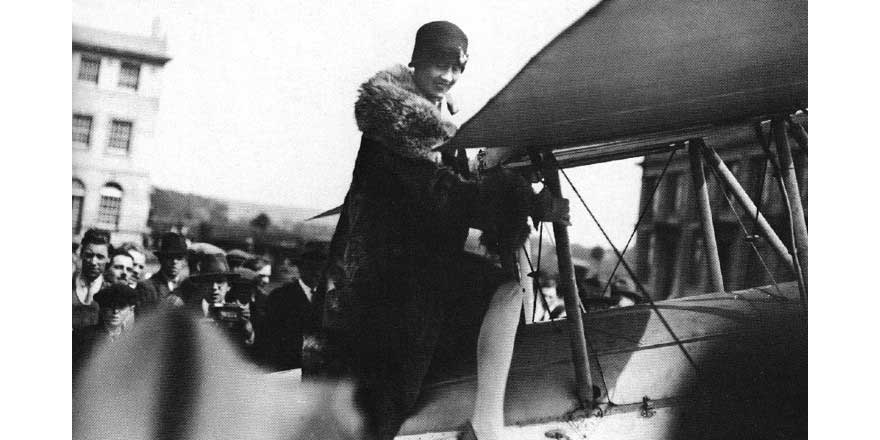 And finally, RTE Brainstorm had an article on the always intriguing topic of Sheela-na-Gigs, mysterious medieval carvings of female figures with prominent vulvas and breasts, which are found in Ireland, Britain and continental Europe.