13 December: our not-quite weekly at this time of year round-up

Well, it’s been a while since the last post but there has been a lot going on. So here goes – another big centenary on 11-12 December, which marks 100 years since the Burning of Cork. And lots of other interesting content too…

St Peter’s church and Nano Nagle Place, both in Cork City, are hosting fascinating exhibitions focused on Cork in 1920 – we have partnered with them this year to publicise the events we have all run connected with #Cork1920. The exhibition at Nano Nagle is called Small Lives: At Home in Cork in 1920 and looks at ordinary lives in Cork City in an extraordinary and tumultuous year.

St Peter’s exhibition focuses specifically on the events of December 1920. They very kindly let us use a short film from their exhibition, which you can see as part of our digital festival, but do go and see the exhibition too.

The painstaking research of Festival contributor Jim Herlihy is highlighted in this article by Ronan McGreevy in the Irish Times. It reveals for the first time the identify of an Auxiliary who wrote an eyewitness account of the burning of the city in December 1920: …”many who witnessed scenes in France and Flanders say that nothing they had experienced was comparable to the punishment meted out in Cork.” 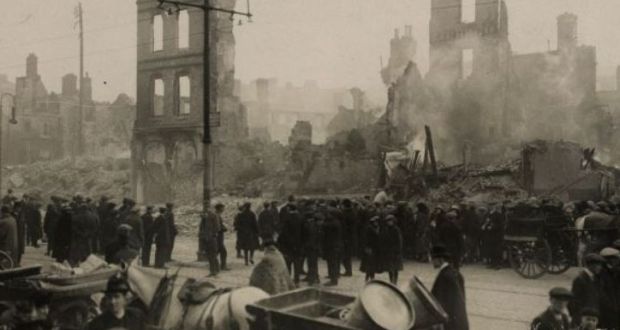 Photo from the National Library of Ireland

Meanwhile away from the Decade of Centenaries, but a piece connected to a Second World War anniversary. Wartime NI website (and their newsletter) records the history of Northern Ireland during the Second World War and features many, many interesting individual experiences. This story from exactly 80 years ago this month caught our eye as it highlighted the dangers for coastal shipping in wartime, not just the long-distance convoys. On 5 December 1940, the SS Privet was sailing from Birkenhead to Belfast with a load of coal when the ship disappeared. It’s not known if the ship sank as a result of enemy action or bad weather, but no trace of the Privet or her nine Northern Irish crew was ever found.

The BBC website featured this very moving feature on Irish mixed race children, many of whose fathers were students from Africa or the Caribbean studying in Dublin in the 1960s and 1970s.

And finally in a rather gloomy December, a wonderful, sunny piece of footage of Lough Hyne in the 1960s posted by the Skibbereen Heritage Centre – wish there was more of it!

PREVIOUSNEXT
22 November: almost too much history this week…..A bumper end of 2020 post – and a Happy New Year !
SEARCH THE SITE
CATEGORIES
RECENT POSTS

‘Thus she shall go to the stars…’