The Cricket Bat that Died for Ireland (and some other things)

This week we have cricket bats, Second World War letters recovered from the sea bed, a virtual tour of Cork’s Crawford Art Gallery and West Cork gates but, very unusually, nothing relating to the Decade of Centenaries.

Starting off this week with a blog – not a new one but one we’d like to recommend, and with the best title: The Cricket Bat that Died for Ireland. It’s written by Brenda Malone at the National Museum of Ireland and features objects from that Museum. Here’s Brenda’s first ever post – on the cricket bat in question.

Saturday’s Financial Times featured an article on Anglo-Irish houses – much of it probably new for English audiences but not for Irish ones – however, it did include some wonderful images and recommendations for reading. Closer to home, and much more down-to-earth, our friends at the Roaringwater Journal blogged this week on gate posts in West Cork.

The Crawford Art Gallery has added a virtual tour to its website – not quite as good as the real thing, but enough until the Gallery can open again.

And finally, a really compelling story that we re-Tweeted this week but is worth coming back to – the sinking of the SS Gairsoppa off the coast of Galway in 1942. Letters recovered from the wreck in 2012 have been restored – the Guardian featured them this week and London’s Postal Museum  had previously done an online exhibition on the letters. The most tragic part of the story is the fate of the crew, of whom only one survived. One lifeboat was launched with seven crew on board. By the time the lifeboat reached the coast of Cornwall a month later only three were alive, but two drowned trying to swim to shore. The photo below shows fragments of one of the letters featured in the Guardian article, to a woman named Iris from an unknown serviceman stationed in the Waziristan region, now part of Pakistan. 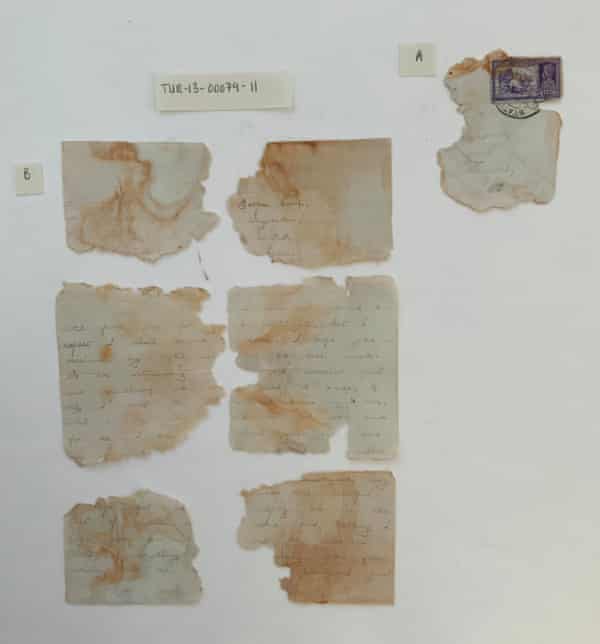