104 years ago today, the Cunard liner Lusitania was sunk off the coast of Cork by a German submarine. The ship went down in only 18 minutes, and more than 1,100 people died, while around 760 survived. One of those who died, and whose body was never found, was the Irish art collector and dealer Sir Hugh Lane. We screened the excellent film Citizen Lane about him, at the 2018 Festival.

One of the most impressive Lusitania artefacts is the one pictured below, held at the Imperial War Museum in London. It’s a camisole worn by Margaret Gwyer on the Lusitania. After the ship was torpedoed, she fell out of a lifeboat into the water and was sucked into one of the ship’s funnels at it sank. An explosion in one of the Lusitania‘s boilers blew her back to the surface and she was eventually picked up and reunited with her husband, who she had married a month before. She kept the oil-stained camisole as a reminder of her ordeal. 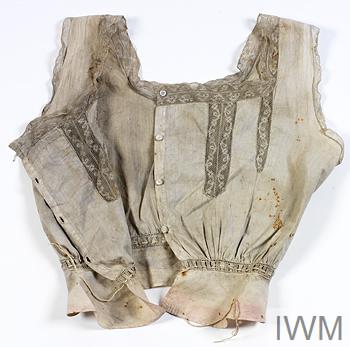