Although the West Cork History Festival does not have one over-arching theme – we prefer to examine a variety of historical periods and locations – we do have some sub-themes, allowing us to devote one or two sessions to a particular subject. The centenary of 1918 is one such sub-theme this year, reflecting a hugely significant series of anniversaries. These include the First World War Armistice and the 1918 General Election, which had such major consequences in Ireland and Britain.

One of our recently confirmed speakers – Ida Milne – will look at the impact on Ireland of a global event in 1918 – the influenza pandemic. Ida Milne is an Irish Research Council Marie Curie Elevate Fellow at Maynooth University and in May 2018 will publish Stacking the Coffins: Influenza, War and Revolution in Ireland 1918-19 (Manchester University Press). The striking cover of her book is shown below. 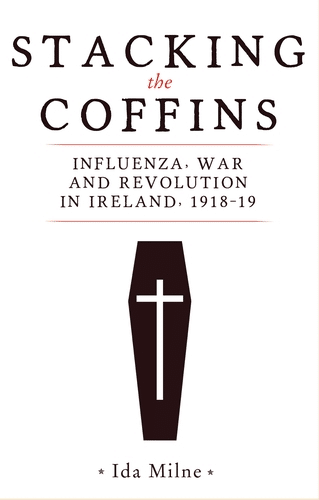 PREVIOUSNEXT
In the press ….Audio of 2017 Festival
SEARCH THE SITE
CATEGORIES
RECENT POSTS