This special concert for this year’s West Cork History Festival is a musical narrative created by Jessie Kennedy and Lady Patsy Puttnam. It is an original work inspired by three years in the life of Lady Mary Carbery, from the years 1898-1901 when she lived in Castlefreke.

“Lady Mary’s story told through her journal was first introduced to me by Jessie. Our collaboration on the Carbery Songs stemmed from that moment and became uniquely special to both of us. Perhaps because in the solemn spaces of Rathbarry Church, Rosscarbery Cathedral and the Sprigging School we sat and talked through the project that had deeply touched both our hearts. The diary of a young woman who had made the journey from the English countryside and who was widowed too soon from the early death of her beloved husband Algy. Mary became the remarkable mistress of Castlefreke bringing up her two boys, It became her Paradise and she fell headlong in love with the Castle, the ‘poor people’ living on the estate and the wild, desolate West Cork headland. Of course this story wasn’t lost on Jessie or me that I as an English lady had chosen to make our family home in West Cork. That I too had been captivated by West Cork’s magnificent landscape, it’s painter’s light and the resilience, creativity and strength of the Irish people, who I too fell in love with.”

The Carbery Songs album was first released in 2015 to great acclaim. Since their collaboration began over three years ago, Jessie and Patsy have performed the piece at Rosscarbery Cathedral, St. Barrahane’s Classical Music Festival, and headlined National Digital Week at Abbeystrewry Church. The original album was produced by composer Justin Grounds, and music legend Donovan also contributed to the record, co-writing ‘Autumn Song’ with Jessie.

The songs were debuted on a cold November day, within the bare stone walls of Castlefreke itself, at the invitation of Mary Carbery’s great grandson Stephen Evans Freke and for a select group of historians.

During her research for the record, Jessie unearthed lost hymns written by Mary Carbery, which had not been heard for a century. She reworked these hymns and they provide part of the musical backdrop to Mary Carbery’s words in the performance.

Acclaimed Irish singer, songwriter and composer Jessie Kennedy has most recently headlined shows at St. Barrahane’s Classical Music Festival in West Cork, Cork Opera House, and The National Concert Hall, Dublin. Jessie is a violinist with The Vespertine Quintet. She is about to release her fourth studio album, which follows her powerfully evocative 2015 record “The Carbery Songs”.

She provided the soundtrack to the National Geographic Wild Atlantic Way film in 2017 which was released world-wide.

This July 2018 Jessie will perform specially commissioned music at a collaborative event with Jeremy Irons, where the historic NM Cummins letter will be read as part of the Coming Home exhibition at Reen Farm, the home of artist John Kelly, in West Cork. 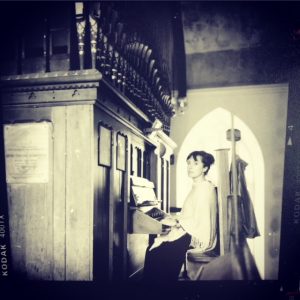 (In The Blue of The Night )- RTE Lyric FM